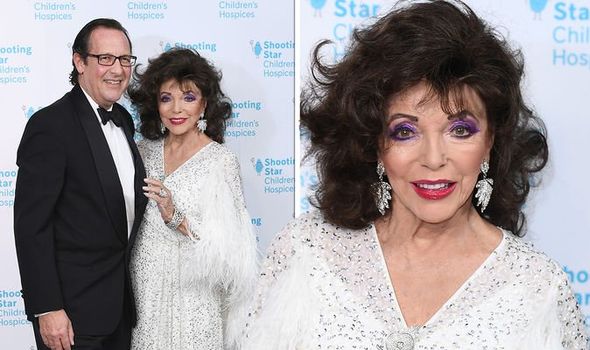 Joan Collins, 88, attended the annual fundraising ball in aid of shooting star CHASE. CHASE is a children’s hospice that cares for children with life-limiting conditions.

Dame Joan was all glammed up for the event this year in a snazzy white ball gown.

The children were pretty happy to see her, too, presenting artwork to her in honour of her Damehood.

But Joan wasn’t the only celebrity guest present at the event.

It took place at The Dorchester in London and guests got treated to performances by Ryan Molloy from the Jersey Boys, British harmony swing group, Jack Pack, and winner of America’s Got Talent, ventriloquist Paul Zerdin.

Karen Sugarman, Director of Fundraising at Shooting Star Chase, said: “As always, I have been overwhelmed by the generosity and support from every one of our guests.

“The Shooting Star Chase Ball is always such a fabulous night and we are thrilled to raise so much yet again.”

Dame Joan Collins posed with other stars in attendance

Joan Collins was spotted chatting with stars like Tony Hadley on the red carpet.

Joan Collins and her husband Percy Gibson were all smiles

Joan has been married to husband Percy since 2002.

Joan and Percy married back in 2002 at Claridge’s Hotel in London.