Chrissy Teigen made headlines back in May, but not for her usual witty banter on Twitter about Bravolebrities or teasing husband John Legend. In fact, she was called out for cyberbullying on social media.

Courtney Stodden, who recently came out as non-binary, revealed hateful tweets that the “Cravings” cookbook author tagged them in back in 2011. One of the tweets read, “@CourtneyStodden my Friday fantasy: you. Dirt nap. Mmmmmm baby.” Stodden also claimed they’d received private DMs from Teigen telling them to kill themselves. Old offensive tweets Teigen directed at Lindsay Lohan and Farrah Abraham also resurfaced. Michael Costello, a former contestant on “Project Runway,” also claimed that Teigen had bullied him to the point that he still has “thoughts of suicide” per BuzzFeed.

While the 35-year-old mom of two posted an apology on Medium, writing that “there is simply no excuse for my past horrible tweets,” she lost contracts with Macy’s and Bloomingdale’s, which carried her line of cookware, as well as a cleaning brand she’d developed with Kris Jenner. The “Lip Sync Battle” host has mostly maintained a low profile since the scandal broke. So what is the former Sports Illustrated model up to these days? Read on to find out. 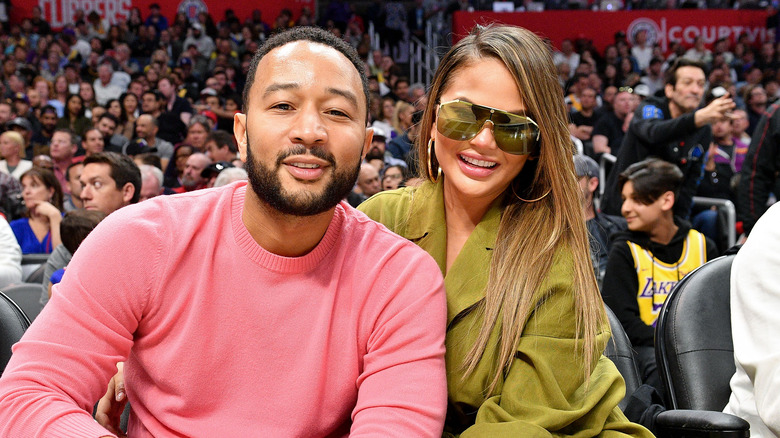 After fans called for her to be canceled, Chrissy Teigen has been laying low, and not posting on her social media accounts as often. Recently, however, she did take to Instagram to reveal how she was feeling lately. “I feel lost and need to find my place again,I need to snap out of this, I desperately wanna communicate with you guys instead of pretending everything is okay,” the “Hungry For More” author wrote. “I’m not used to any other way!! Cancel club is a fascinating thing and I have learned a whollllle lot. Only a few understand it and it’s impossible to know til you’re in it.”

Just a week after posting that message, she was picking up 5-year-old daughter Luna in West Hollywood when she was asked by paparazzi what her thoughts were on Addison Rae excitedly introducing herself to former President Donald Trump at the UFC 264 fight in Las Vegas. “I have decided I’m not getting involved in anyone’s s**t ever again,” Teigen replied, per Daily Mail.

It’s unclear what exactly Chrissy Teigen’s next move is, but it seems like she’s slowly moving back into the public eye after her hiatus.