Gracie McGraw slammed an IG troll who had her gorgeous lingerie pic flagged for ‘selling sex.’

Gracie McGraw slammed an Instagram critic who told Instagram that she was “selling sex” by posting two gorgeous photos of herself wearing a red bra and full-coverage underwear. Moments after the photo was removed, the singer, 23, took to her Instagram Stories with a message for the hater. And she had her middle finger raised in the air for them, if her feelings weren’t clear enough. 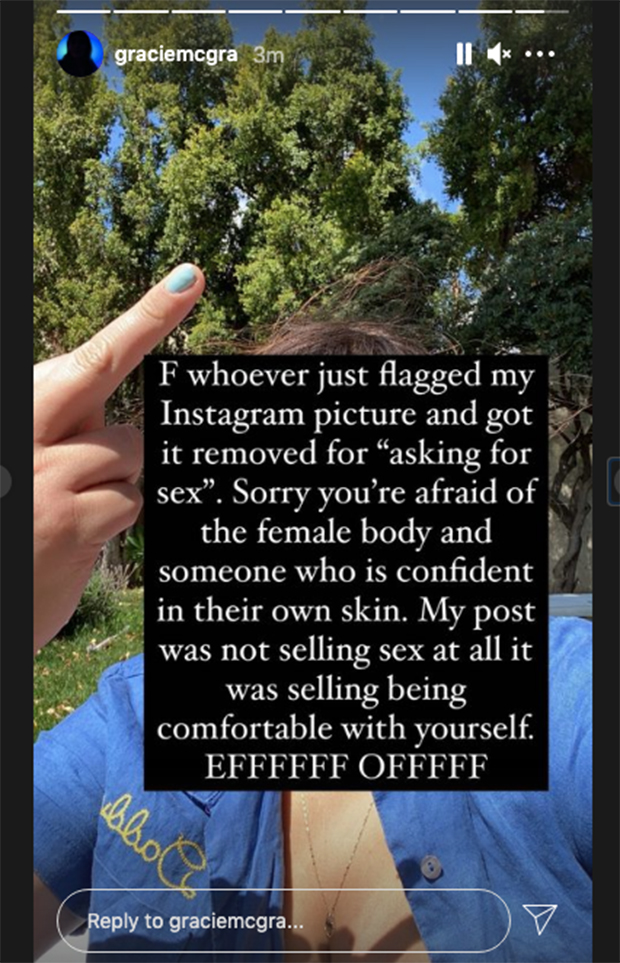 “F whoever just flagged my Instagram picture and got it removed for ‘asking for sex.’ Sorry you’re afraid of the human body and someone who is confident in their own skin. My post was not selling sex at all. It was selling being comfortable with yourself. EFFFFFF OFFFFF,” Gracie wrote on the afternoon of March 23.

But there’s a happy ending to this story! Gracie was able to repost the photos without problem later in the day. It’s a shame that Instagram removed her photo in the first place, because Gracie looked gorgeous in her red lingerie. As you can see in her photos below, the bra and underwear set didn’t show any more skin than your average bikini selfie on Instagram. Her new caption has a little bite to it.

“Finally found a bra that feels good. It’s so hard finding one that fits bigger boobs and CUUP does such a great job of being inclusive for bigger sizing. Thank you,” Gracie wrote. “Also I’m having to post this again because some little bi*!ch was afraid of a womxns body and flagged me for trying to ‘sell sex’ HA bye!!!! What about all these skinny influencer Instagram models posting half nude pics? So unrealistic bodies are approved but real ones aren’t? Cool.”

Gracie, the daughter of country superstars Tim McGraw and Faith Hill, is all about celebrating her body — as she should be! Like any girl her age, she’s all about a good bikini photo. She also speaks up about body positivity frequently. Gracie recently posted about a horrible experience she had shopping — a woman literally took a dress out of her hands and told her it wouldn’t fit! So, Gracie went home to dance it out and embrace her “floppy body.”