By now you’ve probably heard the story of “Soho Karen” — whose real name is Miya Ponsetto btw — but this angry white girl is apparently just getting started.

OK, let’s rewind — back in December the 22-year-old was caught on video in a Manhattan hotel lobby falsely accusing a Black teenager of stealing her phone. After he protested his innocence, she then tackled the poor kid! All of this was filmed by the boy’s father, jazz musician Keyon Harrold, who (reasonably) accused Ponsetto of racial profiling. They found the phone later btw; the teen never had it.

It took several days of investigation — apparently — but NYC detectives coordinated with locals to arrest Ponsetto in her home state of California on Thursday. Apparently cops tried to pull her over at a traffic stop — but gurl refused to stop and drove away!

Man, the privilege! Can you imagine Keyon Jr. trying that strategy??

According to Ventura County Sheriff’s Office, Ponsetto got all the way home where she refused to exit her vehicle — and had to be dragged out by deputies. Just the most Karenny Karen of all time. You just cannot tell her she’s wrong. Wow. 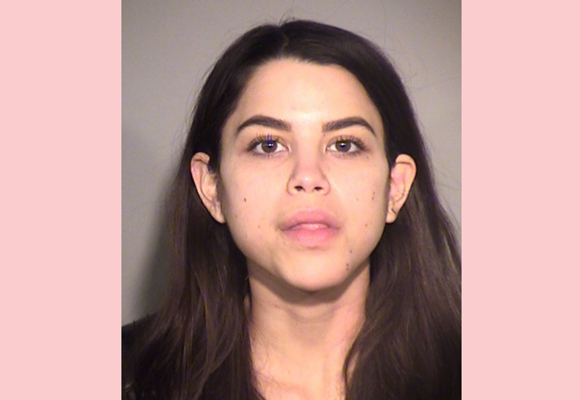 OK, so all that is exciting — but Gayle King struck white gold because hours before the arrest went down, she got an exclusive one-on-one interview with the viral video villain!

It begins with Gayle asking the simple question of why she thought the 14-year-old had her phone. Miya says:

“I was approaching the people that had been exiting the hotel, because in my mind, anybody exiting is probably the one that, might be the one that is trying to steal my phone.”

Reminder: no one was trying to steal her phone. Then she gets somewhere in the neighborhood of an apology:

“I admit, yes, I could have approached the situation differently or maybe not yelled at him like that and made him feel, maybe some sort of… inferior way — making him feel as if I was, like, hurting his feels because that’s not my intention. I consider myself to be super sweet. I really never ever meant for it to, like, hurt him or his father, either.”

Gayle asks for clarification, asking if she stopped everyone who was leaving the hotel at that time, and she admits “not everyone.” It’s still unclear how she came to the conclusion she did in the infamous video — because she seemed pretty darn sure it was Keyon, Jr. at the time. Full-body-takedown sure.

But almost immediately Miya tries to get everyone on her side. She asks Gayle:

“How would you feel if you were alone in New York and, you know, you were going to spend time with your family during the holidays and you lose the one thing that gets stolen from you that has all of the access to the only way that you’re able to get back home?”

Well, something tells us Gayle wouldn’t point the finger at the first Black boy she saw. Just a guess.

When Gayle asks about that tackle — the one that may result in assault charges (currently she’s just facing fugitive charges for fleeing the scene before police could arrive) — Miya immediately sheds any sense of accountability, turning the tables and saying she was the one being attacked!

“At the end of the day, the dad did end up slamming me to the ground and pulling my hair and throwing me and dragging me across the ground so, I, I will say that.”

SERIOUSLY?! GURL, THEY HAVE THE SURVEILLANCE VIDEO! HE WAS PULLING YOU OFF OF HIS SON!

When Gayle points that out, Miya replies:

“The footage shows me attacking his son, of attacking him how? Yelling at him? Yes, OK, I apologize. Can we move on?”

Wow. But Gayle does not want to move on — she says she wants “more context.” In other words she’s trying to get to the heart of this story, the thing this Karen refuses to admit about herself. That her actions that day were driven by racism.

But Miya won’t face that. She says:

“OK, so basically I’m a 22-year-old-girl. I, I don’t, racism… how is one girl accusing a guy about a phone a crime? Where is the context in that? What is the deeper… what is the deeper story here?”

Gayle gets fed up with this willful blindness and points out 22 years old is “old enough to know better.” Ha! She also points out again that everything she did was wrong because the teen didn’t even ever have her phone; the hotel had it.

We guess Ponsetto didn’t think she was actually going to be held accountable for her actions during the interview, because it’s at this point she motions with her hand for Gayle to shut up and says: 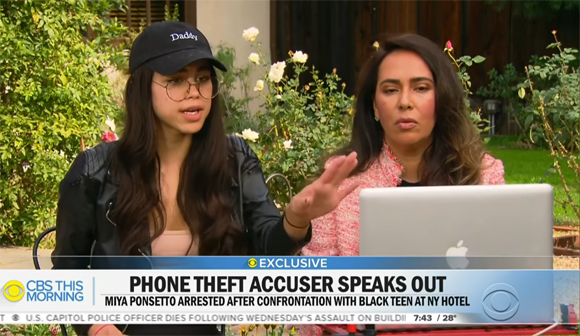 But she said it in a tone like “so THERE” — like she was somehow winning the point. Simply wild.

Ch-ch-check out the entire interview (below)!