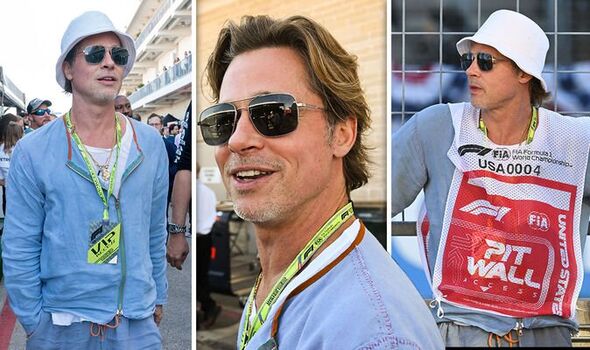 Brad Pitt, 58, dines with Lewis Hamilton as he is pictured looking youthful at Grand Prix

Brad Pitt cut a casual figure as he joined the grid team this weekend at the Circuit of America, to discuss his upcoming Hollywood F1 blockbuster.

Brad Pitt, 58, looked ageless as he brought his Hollywood knowledge to the US Grand Prix in Austin, Texas yesterday.

The actor met with the Grid’s team at the Circuit of Americas on Friday to discuss his upcoming F1 film.

Brad sported a blue zipped shirt with matching trousers, along with white slip-on shoes for the event.

The Hollywood hunk donned stylish black shades as he is pictured after enjoying dinner with Lewis Hamilton to discuss the upcoming F1 movie.

Brad will star as a washed-up driver turned team owner who returns to the cockpit, with Hamilton co-producing and consulting on the blockbuster.

Brad Pitt looked great in a blue zipped jacket, along with matching tie-up trousers. He accessorised with black shades and white trainer shoes.

Emily Ratajkowski quashed the rumours of a relationship with Brad Pitt in a recent interview. She told Variety: “One of the things I write about in the last essay of the book is about control and kind of understanding that one of the best ways to actually be happy and have some semblance of control is letting go. I’m newly single for basically the first time in my life ever, and I just feel like I’m kind of enjoying the freedom of not being super worried about how I’m being perceived.”

Brad Pitt enjoyed dinner on Thursday with the producer and consultant of his upcoming blockbuster, Lewis Hamilton. Joseph Kosinski, the man behind Top Gun: Maverick, who will direct the F1 movie also sat at the table.

Apple TV has bought the rights to the Hollywood film starring Brad Pitt, which reportedly boasts a staggering budget of $140 million (£125 million).

Lewis Hamilton will instead work behind-the-scenes of the production alongside Brad Pitt.

Lewis Hamilton has won the American Grand Prix on a record six occasions, once in Indianapolis and five times in Austin, but he is battling his machinery this time. Hamilton has not won this season, having uniquely done so in every previous year of his career, but a glimmer of hope may reside in Mercedes’ extensive upgrades.