Bigg Boss 14 episodes have started becoming interesting day by day. The show was considered boring initially even after the makers had introduced so many amazing elements. The toofani seniors were one of those elements but all went waste as the new contestants were too laid back. Now, slowly things are getting interesting. We did see some interesting episodes like the recent BB Adalat one. We saw Farah Khan grilling contestants along with journalists Charrul Malik and Amith Tyagi. Her comments and judgements were on point and were loved by the audience. However, a lot of people were not happy with the way she went on defending Eijaz Khan in each and every topic and conversation. Not only us but also fans on Twitter shared a similar opinion and even went on to say that she was behaving like Eijaz’s lawyer. Well, we accept that Eijaz is a strong contender and the senior most in the show, but we accept a celebrity jury to be fair and unbiased.

While Farah Khan said that he is the person, who never does back-bitching, Jasmin Bhasin, Kavita Kaushik and others accused Eijaz of creating a fake image in the show. Farah Khan also spoke about ageism. She kept on saying that the housemates need to respect a person who is elder but also said that they should not keep reminding Eijaz that he a senior. Many did not understand what exactly Farah Khan wanted to say. Even many celebrities like Gauahar Khan, Kamya Panjabi, Diandra Soares, VJ Andy and others did not agree with Farah Khan and did not like her support towards Eijaz. We had asked fans whether they feel that Farah Khan’s support towards Eijaz Khan was intentional and unnecessary. Fans have given their opinions and surprisingly, they do not feel so. 51% people feel that Farah Khan’s support towards Eijaz Khan was not intentional while 49% feel it was intentional and unnecessary. Take a look at the results here: 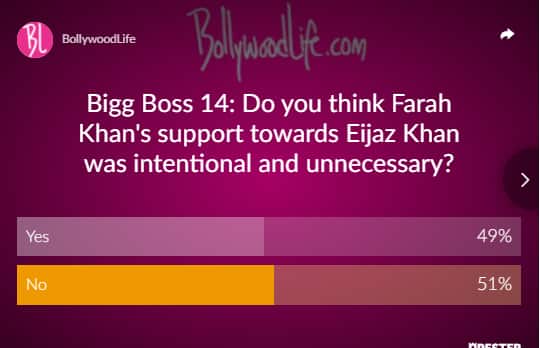