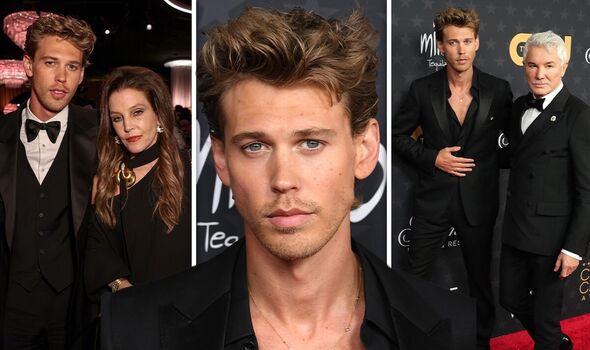 Austin Butler looked sombre as he posed alongside Elvis director Baz Luhrmann on the red carpet at the Critics Choice Awards. The Hollywood actor’s attendance comes just days after the death of Elvis’ only child Lisa Marie Presley.

The Hollywood actor went for an all-black ensemble consisting of an unbuttoned shirt and a black suit coat, paired with a thin gold necklace.

He completed his look with matching black pants and shiny black dress shoes for the annual event.

His appearance comes less than a week after the Golden Globes where Austin won Best Actor for his portrayal of Elvis in the biopic, crediting Lisa and her mother Priscilla Presley for their acceptance.

Austin Butler was nominated for the Best Actor gong at the Critics’ Choice Awards but lost out to Brendan Fraser. This comes less than a week after Lisa Marie Presley and Priscilla Presley were cheering on Austin Butler at the Golden Globes after he collected an award for his portrayal of Elvis.

Austin Butler released a statement to Entertainment Weekly after learning of the death of Lisa Marie Presley. It read: “My heart is completely shattered for Riley, Finley, Harper, and Priscilla at the tragic and unexpected loss of Lisa Marie. I am eternally grateful for the time I was lucky enough to be near her bright light and will forever cherish the quiet moments we shared. Her warmth, her love, and her authenticity will always be remembered.”

After receiving the Golden Globe Award last Tuesday, Austin Butler took a moment to honour Lisa Marie and Priscilla Presley. He said: “I want to thank our incredible producers and Warner Bros. and the Presley family. Thank you, guys. Thank you for opening your hearts, your memories, and your home to me. Lisa Marie, Priscilla, I love you forever.”

Lisa Marie Presley said of Austin Butler’s portrayal of her father Elvis: “It’s almost as if he channelled him. He put everything he had — his heart, his soul, everything he had — into researching, reading, watching, learning. He honoured him in every way possible”, she said in the special Exclusively Elvis: A Special Edition of 20/20.

Lisa Marie Presley spoke to Extra host Billy Bush ahead of the Golden Globes ceremony about Austin Butler. She said Austin nailed the “characteristics [and] the talking without doing it in a caricature way like it’s been done in the past”. She continued: “It’s kind of done in sort of a funny, joking way, the way [Elvis] spoke, but Austin actually got it and did it perfectly without making it comical.”