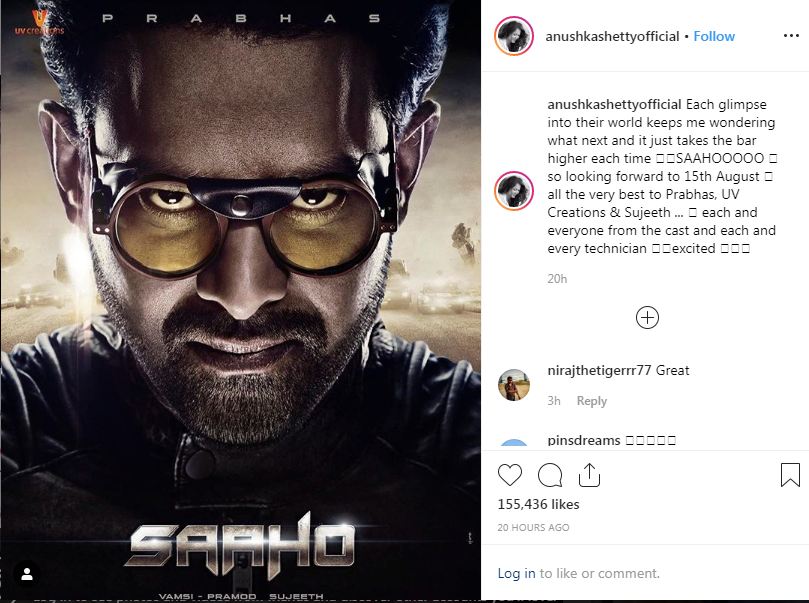 Yesterday Young Rebel Star Prabhas released a new poster from his upcoming action entertainer Saaho, and made official announcement regarding the release date of Sujeeth’ directorial venture. Prabhas captioned the pic, “Here it is darlings, for all of you… The new official poster of my next film Saaho. See you in theatres on 15th August! #15AugWithSaaho”. Finally Anushka Shetty also responded on Prabhas’ Saaho Poster.

Anushka Shetty took to her Instagram and shared the poster of Prabhas starrer Saaho, she wrote, “Each glimpse into their world keeps me wondering what next and it just takes the bar higher each time SAAHOOOOO so looking forward to 15th August all the very best to Prabhas, UV Creations & Sujeeth … each and everyone from the cast and each and every technician, excited.”

Both, Baahubali stars Prabhas and Anushka Shetty have been in the headlines reportedly for their rumored relationship. However, both the actors have been tight-lipped about their relation whether there is something brewing between them.

Saaho has other stars like Shraddha Kapoor, Neil Nitin Mukesh, Evelyn Sharma, Mandira Bedi, and Jackie Shroff in supporting role, which is being helmed by Sujeeth. The film also stars Bollywood actor Jackie Shroff in a key role. Saaho is slated to hit the screens on 15th August 2019.