Johnny Depp’s first significant career move since winning his defamation case against ex-wife Amber Heard isn’t the blockbuster movie many would have anticipated.

The controversial Hollywood star is instead indulging his passion for music by teaming up with legendary British rocker Jeff Beck on a duets album dominated by covers.

Three years in the making — and set in motion long before this year’s brutal courtroom drama — it isn’t Depp’s first foray into music. Since 2012, he’s been a member of LA supergroup the Hollywood Vampires alongside Alice Cooper and Aerosmith guitarist Joe Perry. That band’s 2019 album, Rise, featured a guitar-playing cameo from Beck.

The unlikely pair seem serious about this project, too. They met in 2016, bonding over a mutual love of cars and guitars. This collaboration was first teased when they released a lockdown-inspired cover of John Lennon’s Isolation in 2020.

‘When Johnny and I started playing together, it ignited our youthful spirit and creativity,’ says Beck, 78.

‘We’d joke about how we felt 18 again, so that became the album title. I just hope people will take him seriously as a musician, because it’s a hard thing for some people to accept Johnny Depp can sing rock and roll.’ It might prove even harder for some to accept him in any guise in the aftermath of his undignified battle with Heard. Fans will enjoy this unexpected return, possibly even creating a new audience for Beck in the process. Others, shocked by the trial’s ugly fall-out, will give it a wide berth. 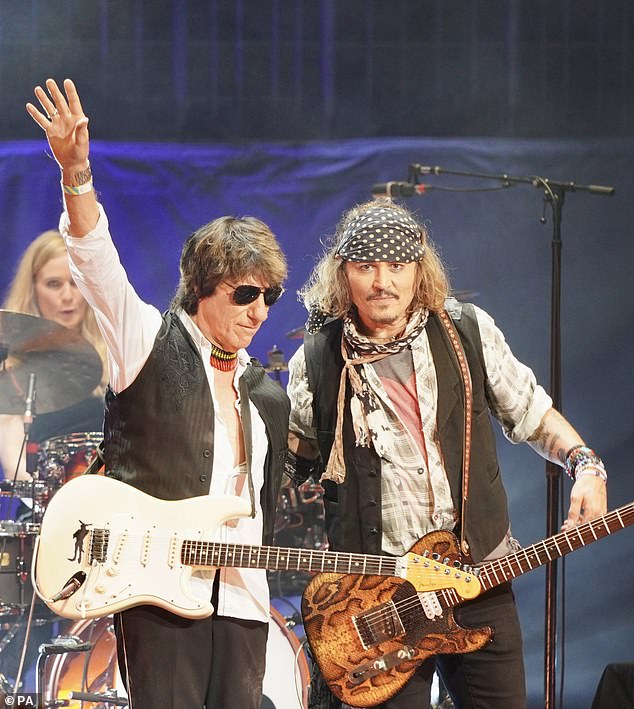 Johnny Depp (right) at the Royal Albert Hall, London, appearing alongside Jeff Beck (left) in May

Taken purely on its artistic merits, it’s a mixed bag. The playing of Beck is as expressive and adaptable as you would expect from a guitar hero who redefined the role of his chosen instrument — and pioneered the classic British rock star haircut into the bargain — after succeeding Eric Clapton in The Yardbirds in 1965.

He deploys atmospheric effects galore and shimmers majestically on the album’s three instrumentals, including two tracks from the Beach Boys’ Pet Sounds. As for Depp, 59, a capable singer and rhythm guitarist, attention will focus on his two original songs.

The first, This Is A Song For Miss Hedy Lamarr, is a ballad about the Viennese-born American screen goddess who, in an unusual double life, was also an inventor who helped develop a radio guidance system that paved the way for Bluetooth and GPS. 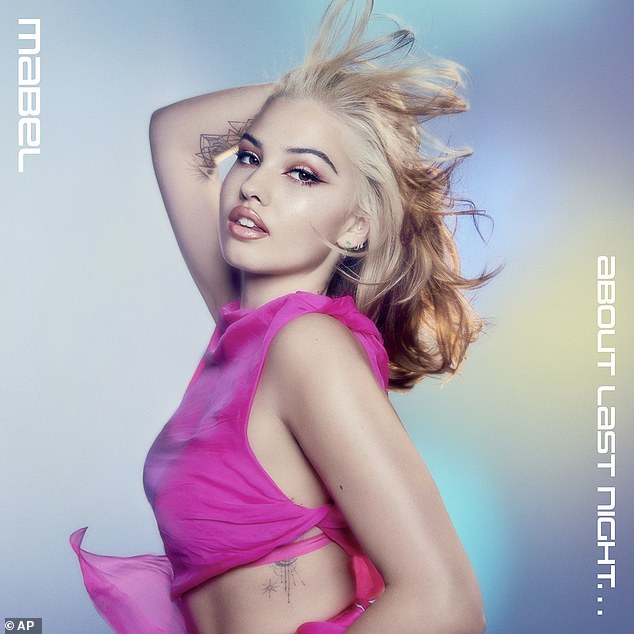 The second Depp-penned number, Sad Motherf***in’ Parade, is a thoroughly unpleasant rant about a toxic relationship that has sparked conjecture that it is directed at Heard. A meandering funk-rock jam, its lyrics consist largely of the title being repeated ad infinitum, with Depp mumbling dark, barely-intelligible asides: ‘If I had a dime, it wouldn’t reach your hand,’ he sneers. ‘You’re sitting there like a dog with a seven-year itch.’

There’s nothing quite as petulant or unpalatable anywhere else. Despite Beck’s best efforts, the duo’s cover of Marvin Gaye’s What’s Going On falls flat, although Depp dovetails well with the guitarist on a tender version of former Beach Boy ­Dennis Wilson’s Time.

Singing in hushed tones, the actor is also self-aware enough to confront his demons on Stars, a lacerating Janis Ian song from 1974 about how fame doesn’t always bring happiness. 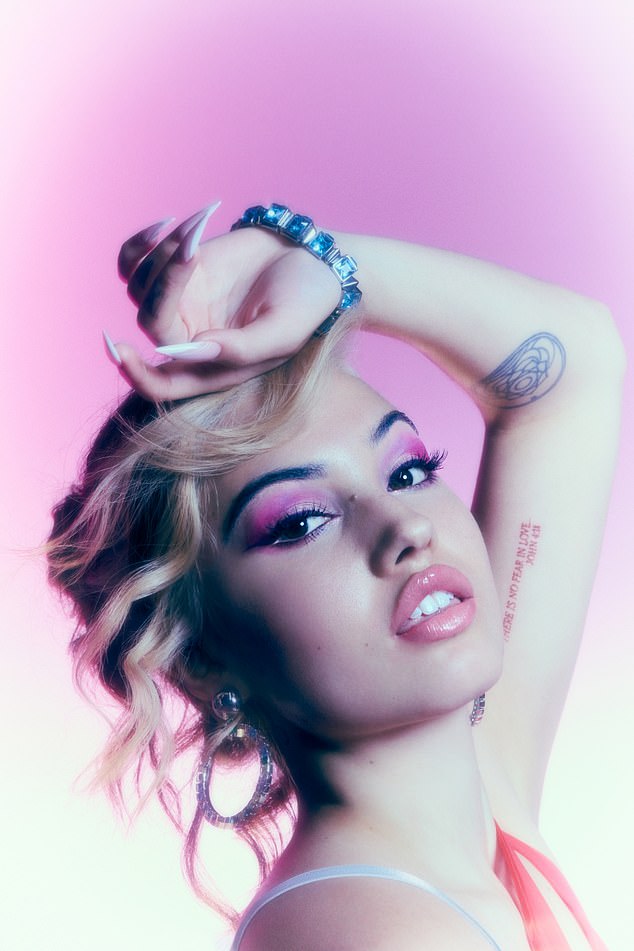 It’s one of the more insightful moments on a patchy affair. There are moments when this feels like more than just a vanity project for a troubled Hollywood star living out his pop fantasies — but it’s the presence of the evergreen Beck that gives 18 its true rock and roll credentials.

But Mabel struggled to cope with fame, her confidence dented by hateful online comments and a sense that she wasn’t up to the job. The 2020 lockdown, a month after her BRITs triumph, came at a convenient time.

She moved back in with her parents (her dad is All Saints producer Cameron McVey) and began sketching out ideas on the piano, making music ‘for myself again’ rather than writing with one eye on the charts. 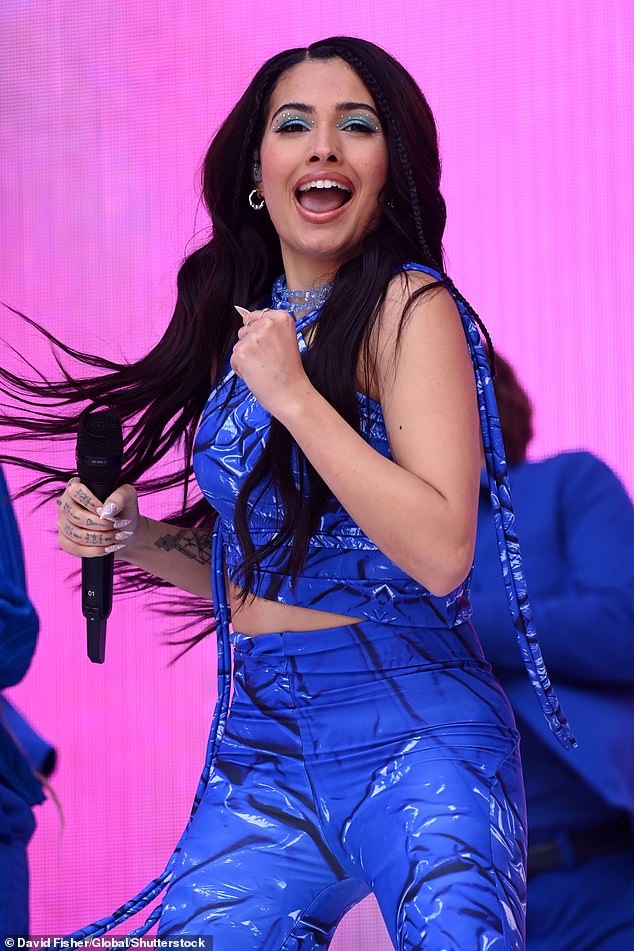 The upshot is an assured sequel that augments the throwback R&B of her debut with sleeker, more streamlined dance music. Unusually for a pop artist, About Last Night… is a concept album, its songs charting the course of an imaginary evening out.

It begins with Mabel getting ready — ‘nails shining like Christmas, heels on six inches’ — and moves through good times in a nightclub before a few tears. The storyline is a little messy… and all the more relatable for that.

This is not the first record based around a night on the town. Bastille took a similar path on 2019’s Doom Days. But Mabel, 26, puts her own spin on the idea, and there’s a brassy confidence to the early numbers.

Things become more reflective in the second half. There’s late-night remorse on When The Party’s Over, and heartache on Let Love Go and Good Luck, the latter seeing the singer dispensing sisterly advice to a wronged girl pal.

The beats, however, remain dancefloor-friendly throughout. ‘I don’t need you and I love that for me,’ she sings on LOL, signing off a spirited return in style.

Both albums are out today. Mabel plays Somerset House, London, on Sunday (somersethouse.org.uk).